It was always me… There never was a time there was an other!

Everyone is only playing out all the beliefs that are held in mind. It seems like they are in my mind but only as long as there is a “mine’ to separate it, for really there is only One mind that believes itself to be separate from Source, God. Nothing can ever be defined by anything, it is only beliefs. Everything is only the reflection of beliefs. Nothing is ever happening the way we think it is. We only see what we believe, what we want to see that is going to reflect or strengthen what we want to strengthen in ourselves! But nothing that we believed about ourselves was ever true. We never were this or that… We never were the way we thought! That is far too little for us. I never was a woman, a beautiful girl, a competitive person, shy, intense, very emotional, sensitive, expressive, passionate, scared of love, scared of disappearing…etc… I was never any of it and neither were you !!! I am Perfect and have always been, and so are you… and there is nothing anyone can do about that

Nothing that anyone has ever done or not done can ever change that Perfection. It is never a play of form and real happenings… It is only a play of beliefs, thoughts!

No one ever did anything wrong, anything right. No one ever did anything at all. Everyone was always playing the perfect part. It is impossible there could ever be anything out of order, as everything that seems to happen is only part of the play of Consciousness. It never is personal! There never was a time that you did something animated by a personal motivation or that you ever had a hidden agenda for anything. If it ever seemed to be that way, it’s only because you hold onto beliefs about yourself that are NOT true! As long as those beliefs are held in mind, you are going to question everything you do and why you do it and you are going to think that there is a reason. But I have great news… there is never a reason for anything that you do. For you never had any control over what happened. You never had a choice. The body was moved to say something, do something, thought through, but there never was anything more than that. The body is not You, it is really just a communication device. It doesn’t have any personal will or will of its own. It is lived through!

These last weeks I’ve watched myself going through so many emotions, such a wild ride at times and I can see how I am not in control of anything. I cannot make the emotions happen, they just do. And I am not in control of making them go, they just do! That is very simple… Life happens, all the time, without “my” consent and just the way it is supposed to be! It’s impossible there would be any glitch in the script. It’s impossible to define who we are based on behavior, as behaviors have nothing to do with Who We Are. Who We Are is the Spark that never ceases to burn, no matter what seems to happen, no matter how bad we seem to feel in the moment or how joyful, it is always the same Spark! We don’t even need to have a Spark for anything, We Are the Spark, and there is no reason for that! We just Are….

Now is the time to let your True Colors shine and sing your heart out!!!!!!!

A Video with David and Armelle in San Rafael, CA
It’s all involuntary, all written! Just rest. Everything is always given!

Jason and I just came back from Kaneohe on the island of Oahu where we offered a movie retreat. The organizers had no idea of what to expect as they never had the opportunity to watch any movies with us but they felt the tickle in their heart and went for it! Now, they just want us to come back as they see how powerful it is to have everything playing out on the screen and just sit back to receive the lesson the Spirit wants to teach us. Jason and I made three new mini-movies the week before in collaboration with Laverne and it was such a beautiful experience for each of us, a real flow in the collaboration and so much JOY. I was so excited about a mini “Repeaters” and how deep that movie goes. Through all the time loops, it shows the way from darkness to the Light of Forgiveness in such an obvious way. I loved how deep it shows that everything that is meant to happen happens, no matter how the form seems to change and that Forgiveness is the way out of the loop of time. I also was so delighted to discover Jason’s mini “After earth” which is such a goldmine for the undoing of the authority problem and stepping full strength into your Function and into fearlessness! Everyone who was meant to be there was there and that was such a great group… It was so beautiful to encounter again one person I saw a month ago when I was there with David in such a different way.He was like a little boy, so open and joyful! I love to see the transformations and the hearts opening!!!

Thank You Robyn for the organization of the event… 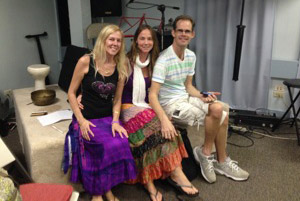 Healing specialness thoughts has been the focus for many of us here at the Extension Center, and Spirit has been guiding us through this in many ways. For Laverne this guidance has come through in the form of this beautiful video that she made using some clips from a Star Trek episode and a Sarah McLachlan song. Such clarity!

I feel like my whole world has shifted since we watched the movie eXistenZ here at the Extension Center last week. Right after we had finished it, I got up and walked towards my room and everything I saw and everything I touched and everything I felt, was totally surreal. It all just felt like a virtual reality. And I marveled at the detail of it all just like the female character in the movie. There is a scene where she is at a gas station and she touches the pump, and smiles at how she can even smell the odor of the gas. This is, in a way, how it has been for me since watching that movie.

The night of the movie, I looked in the mirror and got the sense that the body that I was seeing was not who I am in reality, and that it was just like an avatar character that I pretend to be, a fictional character that I am playing in this life, and I make it walk, and talk, and eat, and sleep and all these things. Then I sat in my bed and seemingly from outside of this body, a thought flowed in and I understood it, and I knew what it meant, and I followed it. I couldn’t help it. I just had to follow it to Laverne and talked to her about whatever the thought was about (just like the characters in the movie; they feel a prompt and follow it involuntarily in order for the script to continue). Later on it turned out that it was perfect for the both of us. I really didn’t know why I was to go to her, I felt no attachment to the question for her so I asked it anyway, and for her it brought up some thoughts, that she then could heal.

So, I’ve been experiencing a lot of prompts from Spirit, and I have been following them and feeling peaceful because of it. His Plan works and His is the only plan that can work. However, I am becoming aware of a sort of filtering now. I’ve been merrily following along with His prompts for a little while now, and it seems that I am now starting to judge what comes in. So it seems that I think that some of His prompts are acceptable and others aren’t. I seem to think that some prompts are holy and others are special. Or that they lead into either holiness or specialness.

Specialness has been a huge topic for me from the moment I got here, and I am beginning to see which relationships are helpful and which ones aren’t. I see the beauty and helpfulness of Spirit-guided relationship assignments in the undoing of specialness thoughts. And I found myself praying for such an assignment about a week ago, because I had come to a place of disillusionment with my past relationships. I want to open to a new kind of love, to real love, and undo specialness. Yet there is still this filtering going on in my mind about the guidance I am receiving from Spirit – that it might be inappropriate, or I fear that this or that might happen if I do follow. But I can just feel how it blocks everything.

Now I’m at a point where I just want to allow myself to drop more deeply into the flow of the guidance I am hearing and drop fully into trust. I want to be fully willing to be wrong about everything I think I know; all assumptions, all doubts, all fear of consequences, all self-conscious thoughts – I want to be wrong about them all. So I can see what is really there, what is true in each moment. I want to come out of this box I’ve put myself in, in which I feel embarrassed, and shy, and unworthy of showing love and affection. I want to let the Love shine away all the fear I have so I can come out of my box soaring!

In such love,
Jutta

Ready for a fresh start and to fly out of the nest…? 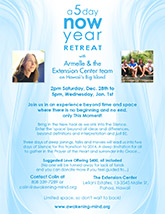 At the end of this month, from the 28th to the 1st, Armelle and the Extension Center team will hold a “Now Year Retreat” here at the Extension Center Hawaii. An invitation for all who feel drawn to sink deeper in the intimate experience of the Present Moment. There will be three days of deep joinings and talks, movie sessions, etc.. and two days of silence. JP will probably offer a beautiful piano meditation during the silence… and I’d be happy to offer an Inner Dance session to open the silent days and having us sink deeper in the Softness. There is still some spaces left for that retreat so connect with Colin if you feel the tickle in your heart…

See more information on the coming events page or on the full size flyer.

There are gatherings and retreats happening all over the globe this season. Have a look at our coming events to join with us.

Spreaker & YouTube
David Hoffmeister joins you from gatherings held all over the world!

Join Us and Go Deeper

Devotional Retreats
Service, devotion, and reverence; the focus of our community.

Our centers are for those who desire to be in service and experience the gifts of prayer and devotion to the Spirit. Our focus on service is a way for the ego thought system to be undone, by reversing the habit of the mind from getting to giving. Our centers offer a space for deepening in devotion. They provide a safe environment to look fearlessly at the ego and come into the experience of living the practical application of our teachings. The sole purpose of coming together in community is the realization of our True Nature. There are opportunities to collaborate in a variety of projects.