“Allow the form to be guided and spontaneous, and allow yourself to remain undefined, in the forgiving state of mind.” 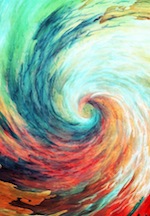 Well what a magnificent swirl of activity has been unfolding here at the Extension Center. The Hawaiian contingent all fly out over the next couple of days (May 16, 17), so as you can imagine there has been plenty to do to complete the handover of this 4 building, 2 acre property with the small remaining team here … only 3 of us currently remain at the Center; Greg, Jutta and myself. The local presence of Jackie and JP at the Temple has also been so felt and appreciated here!

As with every situation we face there is an opportunity for it to be used by Spirit/Love or ego/fear. And it’s so obvious that this time of high activity is being used so beautifully by the Spirit. This has been reflected in the healing that is occurring and the feeling of becoming ever closer to each other.

It’s really only ever the fear of Love which would stop this from occurring and actually that’s not even true … it’s our false idea of what we are and what Love is that has us tremble and resist. When we do surrender and allow the Love to pour in we wonder how we could have ever been afraid. Love is not fearful … it’s only fearful to the ego. And the ego’s idea of what love is, is NOT love … it’s death. As the Course so clearly states in the Introduction:

“Nothing real can be threatened.
Nothing unreal exists.
Herein lies the peace of God.”

Our thanks go out to everyone who has been involved in this wonderful adventure at the EC. We now ready ourselves for our next steps with joy and gratitude in our hearts and mighty companions by our side.

Jutta and Greg will be heading to Utah and I am off to join the Mexican community. Jackie and JP will join the messengers at the monastery.

Love and blessings from Hawaii! 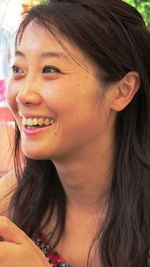 After six months at our La Casa De Milagros center in Mexico, I leave for Utah in a few days. Our Mexico center will move ahead under the Spirit’s guidance without Messengers’ presence for the next two months. Messengers of Peace have served as symbols of those who have devoted their lives to God through total forgiveness (non-possession, purity and guidance). They have also served as an example and an inspiration. On some of our websites we recently replaced the word “messengers” with the word “message.” Messengers are the message they deliver. The teacher of God is a demonstration of the message from the Holy Spirit. “To teach is to demonstrate. There are only two thought systems, and you demonstrate that you believe one or the other is true all the time. From your demonstration others learn, and so do you.” (ACIM, Manual for Teachers)

To have freedom in the mind, we have to forgive the meaning we gave to form and let go of all expectations in form. In our community the daily practices of exposing ego thoughts and being truly authentic bring us to an experience of detachment from attack thoughts. What is also falling away is the interest in being a victim of any kind. Even the spiritual path of letting go and forgiveness can be used as a story of hardship and victimhood to strengthen the personhood identity. The sense that “I” have done anything at all, that I have conquered or achieved anything, eventually feels inauthentic and uninspiring. Equally uninspiring or inauthentic is the other side of the coin: “I” have done something wrong or need to improve in order to wake up. The bottom line is that any story that involves this separate sense of “I” starts to feel inauthentic in every way.

The leap of the Mind to God follows the desire to forgive everything that holds it to the ego’s thought system. Thoughts, stories, self-concept, past memories, future hopes that center around this person … All the good and bad sides of the dualistic world are the same. They are all to be forgiven and let go of in the mind.

“The world I see holds nothing I want” (W-128) and “beyond this world there is a world I want” W-129. Forgiveness is the only function I have in this world. Forgiveness is not in the future and has no exceptions. Without judgment and attack thoughts, what is right in front of me in the moment is equally acceptable compared to any other situation or experience.

In the movieThe Dark Knight Rises, Bane put Batman in a deep underground prison with an opening above on the ground, and told Batman, “Here’s a reason why this prison is the worst hell on earth… hope.” Hell does not feel like hell when it has something attractive, even if it is the hope to escape one day in the future. All the prisoners looked up to the light and imagined climbing to freedom. It seemed so easy and so simple… Yet, even though they kept trying all their lives, they never made it. Twice Batman tried to climb up to the gate with a rope around him to catch him if he fell, but both times he failed. Finally, he packed his belongings and let go of the rope. With no hope of turning back to the false safety of the prison, he made the leap.

A Glimpse of Heaven

This photomontage reminds me of my experience of the Angel Walk. As I walked, eyes closed, between the two rows of my companions, I felt totally loved, completely understood and forgiven. I basked in the purity of my innocence. I felt the sensation of beautiful angels tenderly touching me, whispering gentle words of welcome and sparkling joy into my ear. I sank into the profound certainty that I am Loved by God, my Father, and knew that this is His Will for me, now and forever. I had no more thoughts, just a feeling of pure joy, of Yes!

A Sharing from Emily 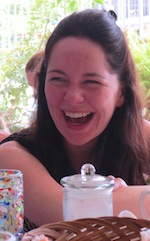 My lesson for today is Lesson 129 “Beyond this world there is a world I want.” It feels very fitting to where my mind is at in this moment. I feel a deep desire to give and my prayer to Spirit has been to show me how. I can see the temptation to try to ‘achieve’ this in form. I have always looked for security in form which was often accompanied by obsessive planning and wanting to be on top of things. There is the tendency to still want to do the same thing now but to try to put a spiritual twist on it.

I asked Frances about this recently and I said that I wanted there to be a shift in my mind with regards to giving, I wanted to give from an authentic place which was beyond the form. Again and again I have tried to lead with form because there is a belief in its importance. That has often left me feeling unfulfilled and frustrated as there was still the desire to get something from it. I was trying to push myself to do what I thought I ‘should’ do. Now I do not want to do that anymore and I do not want the form to be the forerunner, but merely a reflection of my deep desire to serve God.

I wanted to feel inspiration, for the desire to come from within and pour through me. The next morning I felt that my prayer had been answered. While having breakfast an idea popped into my mind about a new project that I would like to do. Instantly I felt ripples of excitement flowing through me and I felt that I might burst if I did not get to share it immediately. I found it difficult to contain my inspiration and everybody I joined with reflected back this enthusiasm. There were no more ‘shoulds’ or detailed plans needed to keep me focused and motivated. The present moment gave me everything that I needed to take the next step. I felt so energized and alert and the old familiar feelings of tiredness and lethargy began to dissolve. Throughout the day other projects that I had been working on began to sparkle with the same inspiration that I was feeling with my new project. There seemed to be a flow to everything that I was not orchestrating. All I needed to do was to follow what felt inspiring in the moment and everything seemed to work together effortlessly. Now my heart was leading and not my head.

I feel so full of gratitude in this moment and so blessed to know that the prayer of my heart is always answered. I see that the only thing that can every be lacking is what I do not desire to give. Whatever I truly desire is always given to me. Thank you Holy Spirit for showing me how glorious life can be when I am serving the Whole.

Quest for Truth-Adventure to Scorpion Island

How beautifully orchestrated Life can be when I allow it! Following the Angel Walk we were all so in love and connected with each other that the next steps of the day miraculously opened up like a golden road before us! I expressed a desire to walk lakeside and take photos of the sunset. Andy suggested a boat ride would be fun! Someone else felt inspired by a boat trip to an island in the middle of Lake Chapala which led to the discovery of the existence of an eating house there as well! So without knowing how it would look or what awaited us, we were gently carried into the undefined, feeling open minded and bubbling with joy … to an experience … drum roll … on Scorpion Island! Enjoy the fun trailer that flowed through us on return! 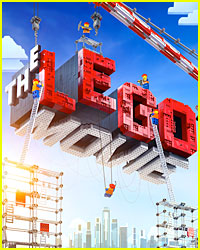 We think we can control the world; we want to fix things with glue so they won’t change. To forgive is to un-glue our judgments, our attack thoughts. If we don’t know who we are, how can we know what we really want? We don’t know anything, so we can’t judge. Don’t draw any conclusions. Rather, withdraw conclusions, the meaning we have given to specific things. Let “undefined” be an experience, not another concept. You don’t know the larger context. Allow the puppet bodies (Lego) to be moved around, but don’t draw conclusions.

Listen to Frances’ Spreaker episode “Be happy” for more insights.

There are gatherings and retreats happening all over the globe this season. Have a look at our coming events to join with us.

Spreaker & YouTube
David Hoffmeister joins you from gatherings held all over the world!

Join Us and Go Deeper

Devotional Retreats
Service, devotion, and reverence; the focus of our community.

Our centers are for those who desire to be in service and experience the gifts of prayer and devotion to the Spirit. Our focus on service is a way for the ego thought system to be undone, by reversing the habit of the mind from getting to giving. Our centers offer a space for deepening in devotion. They provide a safe environment to look fearlessly at the ego and come into the experience of living the practical application of our teachings. The sole purpose of coming together in community is the realization of our True Nature. There are opportunities to collaborate in a variety of projects.